Everyone loves neat tricks in synthesis that are not as easy to spot in retrosynthesis as oxidations or reductions; one of these I came across recently is the conversion of furans to tetrahydropyrans, the Achmatowicz reaction, the seminal publication of which was in 1971 in Tetrahedron:

This reaction was used in a few total syntheses; besides those mentioned in the Wikipedia article, I particularly like O'Doherty's synthesis of the indolizidine (-)-D-Swainsonine published in Org. Lett. The four carbons that will form the five-membered ring of the bicyclic system was formed using the Achmatowicz reaction. 2-Lithiofuran opened the gamma-butyrolactone to install the alpha-oxygen; a TBS protection allowed for asymmetric Noyori reduction of the ketone, installing the necessary stereocenter for the substituent on the tetrahydropuran for the subsequent steps. The Achmatowicz was achieved using NBS.

Other than modifications to the ring's functional groups, the carbonyl was converted to an azide in several steps which was used in the second to last, pivotal step of the synthesis, closing the 5-membered ring via reductive cyclization to complete the indazolidine ring system. (The benzyl group is hydrogenated off, allowing the isomerization to the aldehyde which is then attacked by the nitrogen and the oxygen eliminated.) That makes for two rearrangement-type reactions to form the final product - I won't get into overall strategy and the greater story of the synthesis of the molecule and its enantiomer, but I just wanted to point out how the Achmatowicz was used creatively to make a pretty neat molecule. 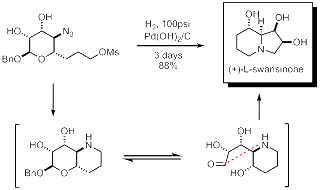 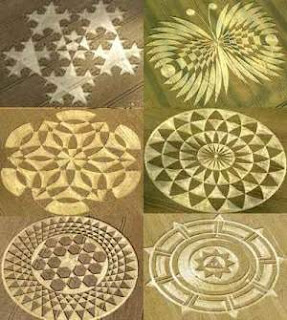 Today, the topic of the show “Is it real?” was crop circles – and I don’t know anything about crop circles, so I watched. They truly are beautiful.  It seemed that believers somehow managed to use the evidence that they are man-made to their advantage, and find meaning in it.  They seem like perfectly normal people with normal lives, except for the fact that their brains interpret the actions of man to be the actions of aliens trying to communicate, and that they can meditate crop circles into being.  Me, personally, I don’t care about crop circles.  I find that they are incredibly annoying, as anything in the press that gets so much attention is, but they are also occurring at great expense to farmers who are having a hard enough time already these last couple decades.  I just can’t imagine what it is in one’s brain that makes them prone to this kind of ideology – there must be something genetic going on there to make their beliefs so malleable.  I’m going to see what kind of research has been done about this.  In the meantime, I have acquired lots of gorgeous pictures of perfectly symmetrical crop circles for desktop backgrounds! And you can hire your very own crop circle makers, didn't you know?

I need to learn.

As all graduate students know all too well, you not only attain a Ph.D. by becoming an expert in your sliver of the scientific universe, but by being obviously well-read in the literature of your general field as well. As an organic chemist, I am currently working on a project that does not allow much diversity in the way of synthesis, but I fully intend to leave this place with a more comprehensive and intuitive ability to predict reaction outcomes, more named reactions under my belt, and understanding of combinatorial and solid-phase synthetic techniques. None of that can I really pay much attention to during the work day, so in my *copious* free time, I will learn them here, and if you care to, you can learn too. I also dig science news, not only because sometimes it's really cool shit, but also because it helps me hang on by that little string by reminding me of the greater picture, so I'd like to learn more about "science" as well. This blog is my ticket to NOT remaining a one-trick pony.
Posted by T at 4:33 AM 1 comment: