Li, Gan, and Ma's recent natural product synthesis of piperazimycin A, the structure of which was reported in 2007, in Angewante Chemie (doi: 10.1002/anie.200904603), attracted me admittedly because of how gorgeous the 18-membered ring with 6 carbonyls pointed toward each other is - seriously, look at it!  Stare into the center of the ring - the oxygens are sort of mesmerizing in a hypnotic sort of way, no? 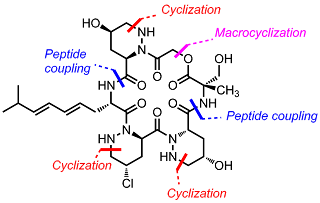 Amino acid chemistry is not my favorite; it's kind of... blah.  Feels archaic somehow. But these amino acids are pretty funky - each fragment was formed with pretty standard chemistry (protections/deprotections and all).  The N-N bonds were introduced with benzyl carbazate and t-butyl carbazate.  The cyclization to form the leftmost-indicated piperazic ring occurred via Mitsunobu condition-induced Fmoc deprotection of the amine (which appears to be novel according to the article) followed by substitution of an alcohol, while the left occurred via Boc deprotection-induced displacement of a triflate and the top via Troc-deprotection induced displacement of a triflate.  Don't forget the structures of these (the deprotection conditions used in the paper alongside): 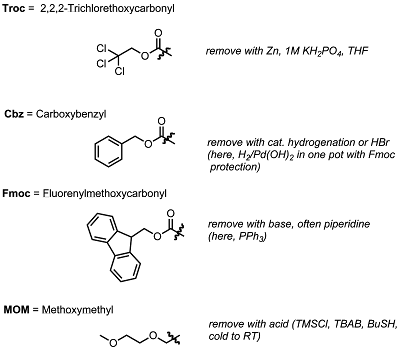 The most interesting part is the macrocyclization; rather than doing a macrolactonization between an acid or ester and an alcohol, the authors used a substitutive strategy by a carboxylate anion attacking a chlorine-turned-iodide leaving group to produce Piperazimycin A in 3.6% overall yield in 26 linear steps.  Tight.  Note the hexachloroacetone (HCA) used for chlorination in the Appel reaction instead of CCl4. Equally toxic reagent, but way cooler.

Japp-Klingemann reaction and lots of anti-s

A 'just accepted' article in Bioorganic and Medicinal Chemistry (doi:10.1016/j.bmc.2009.10.012) caught my attention because of the number of "anti" activities stated in the title for a particlar 'new' class of compounds, 2-arylazobenzosuberones: "Synthesis, Tautomerism, Antimicrobial, Anti-HCV, Anti-SSPE, Antioxidant and Antitumor activities of Arylazobenzosuberones."  From one common precursor, 12 compounds were synthesized with variation of the arene group of the diazonium salt coupling power.  Reaction of 1-benzosuberone-2-dimethylaminomethylene with aryl diazonium chloride resulted in the Japp-Klingemann type cleavage of the dimethylaminomethylene group.

The Japp-Klingemann reaction normally involves the reaction of beta-keto esters or acids with aryldiazonium salts in the presence of base to form hydrazones, usually in aqueous medium but in alcohols if solubility is poor: 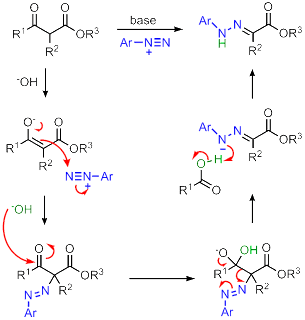 In this paper, however, an alpha-dimethylaminomethylene group functions as the original ketone in this case, so there's no need for a strong base - the conditions for the reaction are sodium acetate in ethanol at 0-5 °C for 20 minutes, then overnight in a refrigerator to crash out the product. 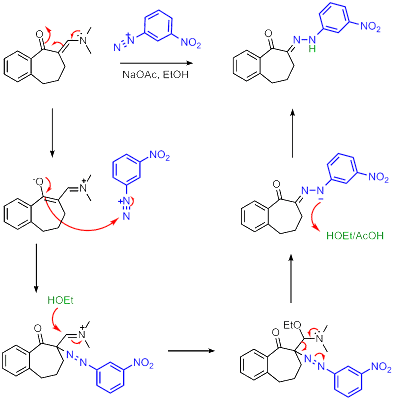 So for all the anti's - 8 of these compounds were tested for inhibitation of growth of 4 strains of bacteria and 4 strains of fungi using the agar diffusion method.  Referenced antibacterial drugs are mentioned, but not identified nor is comparison data for the standard included in the data presented in the form of Minimum Inhibitory Concentration (MIC) values.  The paper claimed much better activity of some of the compounds than the standards, but the units of the values are GRAMS per mL. That's HUGE to me... the lowest measured was 0.313 g/mL.  The tetra- and pentacyclic compounds below weren't tested, but I would've liked to see them tested, since the heteroarene rings are such great pharmacaphores and they're much different than the rest of the bicyclic azoketosuberones.

When I read these kinds of med chem type papers I take an especially harsh eye to it, definitely not because I'm a scientist and thus am cynical (which I definitely am), but because it's a habit from being a reviewer for a school journal.  Everything we got in seemed to me so unimpressive that I finally got fed up and quit being on the board.  The biological studies in this paper made me feel like that.  Please, please don't talk up your results.  Just tell them how they are and let the community decide whether or not your compounds are the shit.  When I just now got around to opening the Kürti and Czakó text, I wasn't surprised to see a similar ring system used to make a remarkably similar product by G. Primofiore and co-workers in 1993 (see below, from p.225)... ripoffs! Can't believe I wasted that time. The only thing I liked was that all the compounds were in the yellow/orange range in moderate to good yields... slightly redeeming.

Posted by Crystallinity at 7:33 PM No comments:

One reaction at a time


Posted by Crystallinity at 9:24 PM No comments:

I shuddered when I saw the sugary graphical abstract for Danishefsky's recent JOC Note, "A Practical Total Synthesis of Globo-H for Use in Anticancer Vaccines."  (doi: 10.1021/jo901682p) And then a moment later, I realized... anticancer vaccines?!  Where the hell have I been?  Apparently, this glycosphingolipid compound Globo-H is an antigen that was isolated in 1983 from a breast cancer cell line, and is now known to also be over-expressed on the surface of other types of cancer cells (prostate, ovary, lung, colon, and small cell lung cancers).  Administration with alpha-galactosylceramide induces antibodies against globo-H and SSEA3 (the pentasaccharide precursor of globo-H).  If I understand correctly, it's the equivalent of administering a dead or partial or similar virus in order to trigger the formation of antibodies.  The pentavalent vaccine also contains other antigens that are overexpressed on cancer cells (prostate and breast).  A search for "globo-h" on pubs.acs.org alone produces 118 hits, encompassing syntheses, development, and animal studies.

There have been other syntheses, including that of Schmidt, Boons, Wong, Seeberger (2002 and 2007), and Huang referenced in Danishefsky's paper, and an earlier synthesis of his as well which was too low-yielding.  The ABC trisaccharide that will be incorporated later was synthesized according to the previously reported Cp2Zr(OTf)2-mediated coupling.  The starting material was synthesized via α-epoxidation followed by glycosylation to produce the DE disaccharide shown below; coupling of this molecule with the thiofucosyl donor (with fucose being a hexose deoxy sugar) selectively produced the α-trisaccharide. The conditions screened that produced the highest yield, 80%, were Cp2Zr(OTf)2 with 5:1 toluene:THF and 2,6-di-t-butylpyridine(hindered base) in the dark over 72 hours, but the conditions the authors moved forward with produced an impressive 78% yield in only 4 hours:

That's not so scary - silver triflate draws the chlorine away from TolSCl, which pulls -STol in after the alcohol displaces it. The next step involved a (to me) funky iodine reagent, I(coll)2ClO4 to promote iodosulfonimidation of the now DEF glycol.  The sulfonamide blocks any attack from the bottom face of the ring, forcing the nucleophile in the next step to attack from the top to form the β-isomer. Treatment of the crude intermediate with lithium ethanethiolate leads to the complete DEF donor in 75%, ready for coupling with the ABC acceptor. 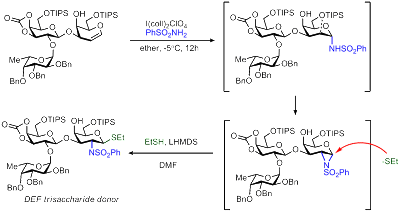 The last coupling proceeds without fuss in 72% yield after treatment with methyl triflate. Deprotection of TIPS with TBAF and Bn with sodium reducing conditions followed by global peracetylation leads to the target hexasaccharide: 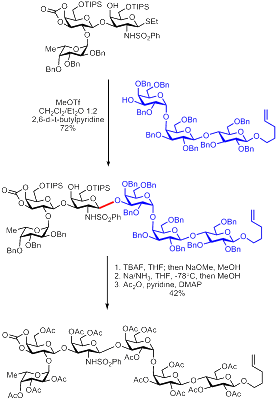 The last steps to append this molecule to the carrier protein KLH (keyhole limpet hemocyanin) were previously published by Danishefsky and co-workers, as was to covalently link the molecule to an amide (doi: 10.3987/COM-08-S(D)82). I'll add those as soon as Heterocycles loads on my work laptop tomorrow.

Uranium is the 92nd element, and the last naturally occurring element, in the periodic table.  I've always held an intense disdain for it since my final project in junior Inorganic Chemistry was to elucidate the energy levels and their symmetry of UO2. F AND d orbitals?  Seriously?  No one else had to deal with f orbitals. I know it was a test because I was a straight A student and he wanted to see if I was as brilliant as I seemed... nope.  It was an awful presentation, and a classmate was nice enough to bring me home on her red, brand new Vespa to cheer me up. (Bitch.)  Anyway, what I didn't know at the time was that organouranium compounds, and organoactinides on the whole, are actually freaking awesome.  Uranium complexes can catalyze oligomerization, dimerization, hydrosilation and hydroamination of terminal alkynes, hydrogenation of arenes, polymerization of olefins, and coupling of isonitriles with terminal alkynes, all extensively reviewed in Coordination Chemistry Reviews in 2006 (doi:10.1016/j.ccr.2005.12.007).  It's a really interesting review, even if you just check out the schemes.  Another published last year on organouranium and organothorium specifically is also worth checking out (doi 10.1039/b614969n).

What caught my eye was a paper that just came out in Early View in ACIE by the Diaconescu group at UCLA, in which examined the reaction of a dibenzyl uranium complex with multiple equivalents of methylimidazole.  They found that instead of merely coordinating, as one would expect such a heterocycle to do with a transition metal, the metal center inserted itself into the C2 position's C-H bond on two separate methylimidazole molecules; a third equivalent coordinates via the lone pair.  By using deuterated benzene as the solvent, they were able to observe that two equivalents of toluene are also formed, confirming the C-H insertion steps. Mechanistically, uranium doesn't proceed through oxidative addition or reductive elimination steps like the transition metals; rather, it goes through a sigma-bond metathesis type 4-center transition state. The C-H insertion positions are highlighted in red. 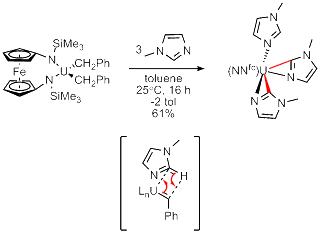 That's not all - after the imidazoles are bonded to uranium, crazy sh#t happens.  Two of the imidazoles couple, which prepares one for ring-opening, then migratory insertion to create a crazy structure that  I wouldn't believe if they weren't supported by crystal structures. It's not surprising that it requires a lot of heat and a lot of time to accomplish. 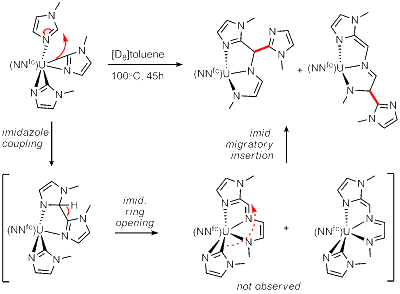 The intermediates in brackets were not able to be isolated in this case, but when 1-methylbenzimidazole was used instead of 1-methylimidazole, the reaction stopped at the first intermediate directly after the imidazole coupling, and they were able to isolate and confirm the structure of the complex.  Here are the crystal structures of the reaction with 1-methylimidazole to compare with the products (with 50% and 35% ellipsoids, respectively).

Posted by Crystallinity at 12:59 PM 5 comments: