I selected the Strecker synthesis based on a recent Nature paper by Jacobsen and coworkers using an asymmetric Strecker synthesis to create unnatural α-amino acids. The classical Strecker reaction, first reported in 1850 (!), involves the reaction of a carbonyl acompound (ketone or aldehyde) with ammonia (to create the free amine) or primary or secondary amines to form an α-amino nitrile, which can be followed by acidification to hydrolize the nitrile group to a carboxylic acid.  (The intermediate may also be reduced to produce 1,2-diamines or undergo α-substitution chemistry following deprotonation at the α-position, provided there is an available proton). The mechanism/sequence concluding with acid-catalyzed, sans the formation of the iminium and acid stepwise, is shown below. 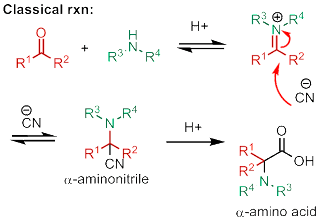 The entire sequence can be achieved in one pot.  This reaction and the synthesis of amino acids can be easily rendered asymmetric using a chiral Lewis acid or an organocatalyst (in the latter, the additive would coordinate to the imine nitrogen...it would obviously have to be trisubstituted/neutral for this to occur) and another basic moiety at the appropriate distance would associate with the proton from HCN, pulling H away and direct the CN to whichever side of the imine it is closest to.  Anionic CN sources are generally a problem because of the toxicity of the CN anion, and so improvements and modifications to the reaction are continuously made.  Examples of reagents include Bu3SnCN, TMSCN (which is expensive and difficult to handle), Et2AlCN, and HCN; while KCN and NaCN are desirable as they are inexpensive and easily handled cyanide salts, they are not typically seen presumably due to their low solubility in organic solvents unless buffered aqueous medium is used, according to the authors of the Nature paper.

A neat caveat to α-amino nitriles is that if they are treated with a heavy metal salt (such as a Ag(I) salt), a Brönsted or Lewis acid, cyanide can be a leaving group to reform iminium which is trappable by a nucleophile - when the nucleophile is organometallic, the reaction is the Bruylants reaction.

Jacobsen and coworkers have developed a chiral catalyst derived from (S)-tert-leucine (read: inexpensive and accessible) to achieve asymmetric imine hydrocyanation.  Using 2 equivalents of TMSCN, 2 equivalents of MeOH, and 0.5 mol% of the catalyst in 0.2 M toluene at -30C for 20 hours, excellent yields were achieved with good to excellent ee with the exception of only a few of the reported substrates which were still in good yield. 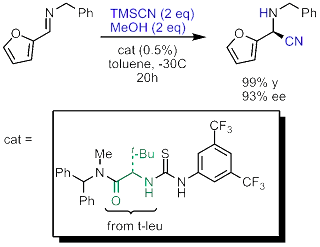 A nice graphic that explains the enantioselectivity was presented in the paper:

Another example which is included in the entry in Kürti and Czakó text is in the synthesis of (-)-α-kainic acid, a neurotoxic compound that induces seizures (it is used in research commonly to induce seizures in rats).  It is a kainate receptor agonist (hence its name), and since the kainate receptor is one of the "ionotropic glutamate receptors" it is understandably a stimulant (glutamate is an excitatory neurotransmitter).  The Strecker reaction in this case is mediated by zirconium with the Schwartz reagent to form imine, which was not isolated but directly treated with cyanotrimethylsilane to produce the α-amino nitrile.  Hydrolysis to the acid and concomitant epimerization selectively led to (-)-α-kainic acid. 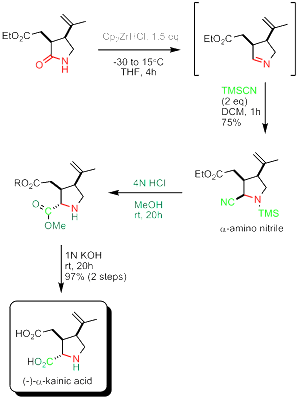 I hope you like the festive-colored kainic acid!
Posted by Crystallinity at 9:04 PM 2 comments:

Have you ever had starfruit (also called carambola)?  Personally, to me they taste like apple, without the grainy texture, and they're super cute.

The Talapin group at the University of Chicago has taken some SEM images that look JUST like them.  Yum!

Reaction of the Week #1 - Schmidt reaction

I intended this to come out at least a week ago, but with the holiday season seems to come family crises and deaths.

So. The Schmidt reaction.  Its seminal publication came in 1923 It's pretty commonly known, and very similar to the Curtius and the Hofmann rearrangements taught in undergraduate organic II.  It can transform a carboxylic acid into an amine one carbon shorter, an aldehyde into a nitrile (generally aromatic aldehydes), or a ketone into an amide or lactam (depending on the starting material) with the addition of HN3, hydrazoic acid, in acidic conditions (the first few times I looked at it my brain saw NH3, so watch out).  Other groups that may react with HN3 are nitriles, imines, diimides, some alkenes, and alcohols, according to the Kürti and Czakó text, as well as any other acid-sensitive groups. 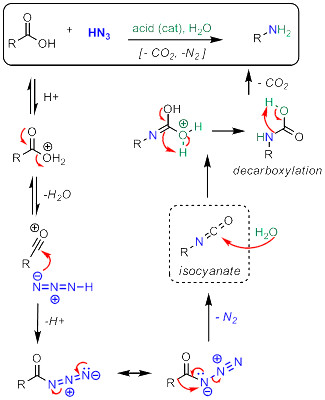 The intramolecular version appears in the literature frequently.  An alternative electrophile to those listed above (and the acid-to-carboxonium shown in the mechanism) is a leaving group, such as an iodide, triflate, tosylate or nosylate.  A recent JACS Communication by Kapat and coworkers at the University of Berne (Switzerland) used an acid-free version of this variation that produced great enantioselectivity of a natural product from tree frog skin, (-)-indolizidine 167B.  (This target is fairly attractive for the challenge of that particular stereocenter; a quick Google search will show you quite a few other approaches.) This is the TOC graphical abstract...to be honest the colors are what made me check it out.

The full synthesis is detailed below. There was a few interesting reactions so I wrote the synthesis out stepwise.  Copper-catalyzed asymmetric allylic substitution with a Grignard reagent enantioselectively installed a t-butoxypropyl group.  The terminal alkene then underwent carboazidation - which is a really neat reaction, though at first glance the reagents looked like some gen. chem. magic.  Reduction of the ester to the alcohol which was tosylated and then reduced resulted in the desired propyl side chain.  The t-butyl ether was cleaved under mild Lewis acidic conditions to produce the free primary alcohol.   Note the box with various deprotection conditions for t-butyl ethers (the group is generally installed with isobutene in the presence of acid).

The last few steps where the Schmidt comes in are as follows: 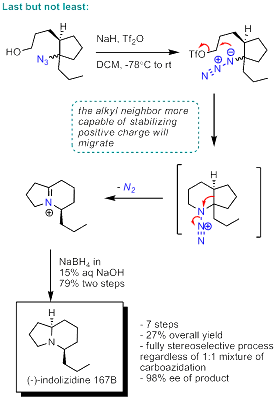 The free alcohol is converted to the triflate, which is nucleophilically attacked by the azide anion.  A 1,2-alkyl shift ejects nitrogen gas, and reduction of the iminium product results in 98% ee, 79% yield of the natural product.
Posted by Crystallinity at 4:01 AM No comments: