Some science for raw foodists

I once lived with a woman who insisted that cooking food broke down the enzymes that we so desperately need from the food.
...
This same roommate also insisted that water kept at room temperature was more "alkaline" than when it was cold.  (Though this website insists that the water must have a pH = 10 to have this effect, and that if you drink it, it will clean toxins from your body. She insisted temperature alone achieved this desired effect.)
...
She was taking general chemistry at my university at the time, in my very department.  Apparently equilibrium means nothing to her... would you trust her as your doctor?  Excuse me, as your holistic natural medicine doctor who seeks to legitimize the profession by attending medical school.  I have zero beef with natural medicine, don't get me wrong, but more alkaline at room temp??  Is there a temperature dependence constant missing from H2O → H+ + OH- ??  F, man.  I have a beef with momos who deny the fundamentals of general chemistry.  Or who doesn't realize that the person or book that told her that might've said the pH was higher...
So, I acknowledge the health benefits of restricting the amount of processed food that one consumes, and in many fruits and vegetables, cooking does cause vitamins to leach from the greens into water, sometimes to an alarming degree.  Freezing in many cases also causes nutrient-dense foods to lose their potency.  Thanks to an article that just came out in Journal of Agricultural and Food Chemistry, we can now argue that at least eggplants do not behave the same way.
Sample preparation:  Eggplant (the "black bell" variety) was grown in a research facility in Lodi, Italy, selected by visual inspection to be homogenous in size, color, and free from diseases or pests.  The fruits were cut into 1 cm slices and treated one of three ways - 1) kept raw (freeze-dried and lyophilized); 2) grilled on a surface of 190-210C such that the inside reached and stayed at 100C; 3) boiled in 10 min in tap water at a 1:10 fruit:water ratio such that the inside of the slices reached and stayed at 100C.  The grilled and boiled fruits were cooled for 1 minute at room temperature, then immediately frozen and lyophilized until constant weight was reached.   From these samples, 2 g samples were taken from each treatment group, treated twice with 55 mL 75% EtOH at 60C then dried with 20 mL acetone until constant weight to produce ethanol-insoluble residue, EIR.  (I bet you never thought about food sample preparation in science before, eh?)
Analytical chemical analyses: 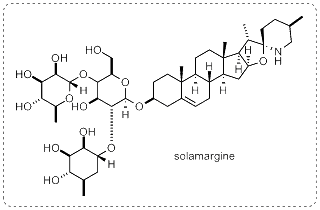 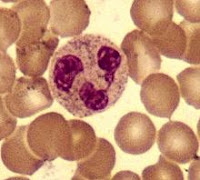 Biological assay:  Human polymorphonuclear neutrophils, which are the most common type of white blood cells (shown at the left surrounded by red blood cells), polymorphonuclear because their nuclei are often lobed -  are a type of granulocytes (dubbed so because their cytoplasms are granular in appearance).  These cells were isolated from human blood samples and chosen because when under oxidative stress, they produce oxidative species (as a good white blood cell should!) including superoxide anions, peroxides, oxygen radicals, hydroxyl radicals, and HClO, which are all considered "reactive oxidative species" (ROS).  The assay involved viewing the cells under a fluoroscence microscope to visualize the chemiluminescence produced by luminol when luminol is reacted with one of these ROS; this "luminol-amplified chemiluminescence" (LACL) assay allowed the researchers to measure oxidative bursts given off by the cells in response to varying concentrations of the eggplant extract; the fewer the bursts, the more antioxidant species the extract contains as the cells are emitting fewer ROS.
The authors found that cooking didn't affect the glycoalkaloid content, but the phenolic content was increased threefold, most likely due to greater extractability of the compounds by cooking.  The effect of the extract on the neutrophils was very marked, and the researchers were able to extrapolate that approximately 40 - 80 g of eggplant, which can be obtained in one serving, may be able to react with all the neutrophils in the body.   The following TOC graphic (black & white in the paper) shows that at higher concentration of extract, the inhibition of ROS is greater - though the concentrations needed to cause this effect are quite low.  Hope you like eggplant!  Make sure you grill the heck out of it.

Posted by Crystallinity at 8:42 PM 15 comments:

Pinacol boronates are important synthetic building blocks used predominantly in the Suzuki-Miyura coupling reaction. Instead of a boronic acid, R-B(OH)2, the hydroxyls are substituted with a cyclic organic moiety, commonly pinacol. These compounds are often generated via iridium catalysis with alcohols and diboron starting materials; the use of metals in their synthesis complicates industry synthesis, however, as boronic acids and esters at time can be unstable and thus difficult to purify. Price is also an issue, as many of these molecules are pricey.

Fanyang Mo and authors from Peking University have published a method to convert arylamines to pinacol boronates without the use of metals at room temperature. This is great news. The approach uses a Sandmeyer-type reaction sequence to activate the amine, the diboron reagent B 2pin2, and a catalytic amount of a radical initiator, benzoyl peroxide (BPO). Unfortunately, there are some limitations on the substrate scope as the substitution - and hence, the electronics - of the aryl ring strongly affect the reactivity of the arylamines. For example, meta-substitued electron donating groups are not tolerated, and steric bulk via ortho substituents do result in low yields or even trace amounts of products. Halogen substituents are tolerated, though, which could potentially be useful further on in a synthesis for orthogonal reactivity. The optimized reaction conditions and a sampling from the substrate table are below. 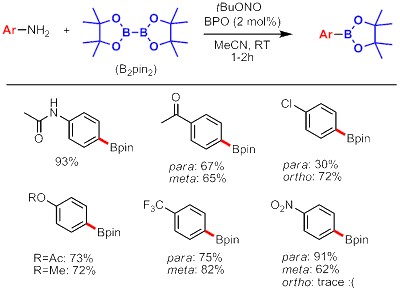 As the isolation of boronic acids and esters can sometimes be tricky, the researchers were able to establish that the crude material can be treated with activated charcoal and filtered through Celite to produce a compound that can undergo the Suzuki-Miyaura reaction (under standard conditions) well.  Those provided in the paper are below.  Cool, huh? 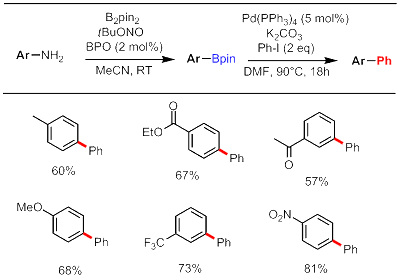 Posted by Crystallinity at 7:33 PM 3 comments:

M. Christina White from UIUC has again hit Science with her direct C-H functionalization chemistry in the January 29th issue (doi: 10.1126/science.1183602). As an alternate route to traditional functional group modification, White's group, and those of groups pursuing C-H functionalization (which I mentioned in my previous post) seek to "streamline" synthesis by cutting out unnecessary steps and going right in for the kill at the otherwise "inert" C-H bond.  Badass.


In this paper, selective methylene C-H oxidation is achieved with substoichiometric amounts of peroxide, acetic acid, and the same catalyst as published in the same journal in 2007 for tertiary C-H bond activation, Fe(S,S-PDP) - nice environmentally friendly conditions.  This time the catalyst is selective for secondary C-H bonds when tertiary positions are unfavored due to additional sterics or a nearby electron withdrawing group (EWG).  This was indicated in one of the substrates in the 2007 Science paper, so it's not a huge surprise nor is it fishy that the selectivity is suddenly "different." 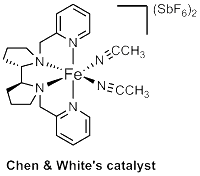 Normally, tertiary C-H bonds (tertiary = 3 C's attached to the C) are the easiest for this catalyst to cleave as they are the most electron-rich C-H bonds of the molecule, but the catalyst is surprisingly - and predictably - selective for certain secondary C-H bonds, as demonstrated with a substrate scope table and a few complex molecules to boot.  The C-H bond that is oxidized:
These are all very intuitive factors to drive selectivity.  One of the tables neatly summed them up with examples, so I'm reproducing it here (crappily), complete with White's signature office-wall yellow: 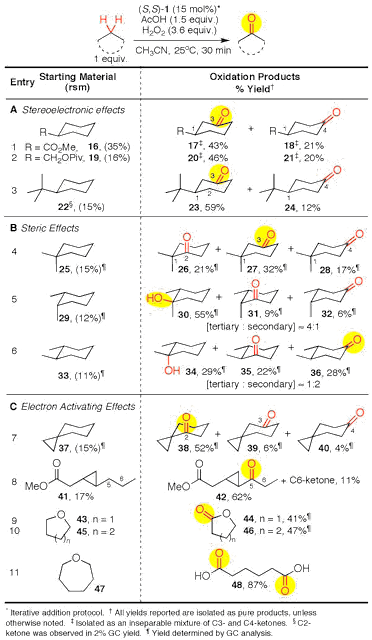 Check out this exquisite example of applying the methodology to a more complex substrate - the method predicts the sites of oxidation well. 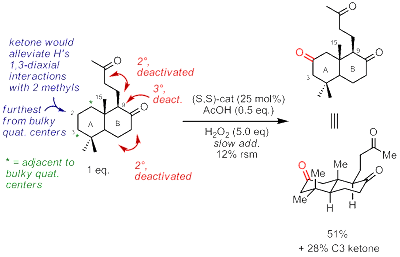 Picky, skeptical scientist that I am, I'm a wee bit bothered by the lack of integrations on the 1H NMR spectra and the obvious alteration of the HMQC spectra  in the Supporting Information (it looks like someone dragged around the big spraypainter in Paint - at least when I viewed it on a Macbook Pro).  I suppose beautification is important, but why don't I get to see the dirty specks??  Anyway, there are 2 different sets of conditions to perform this reaction, one of which is sometimes better than the other - either a slow addition with 25 mol% catalyst and the peroxide (~1h) via syringe pump, or 3 iterative additions with 5 mol% catalyst and the peroxide in each, dropwise. 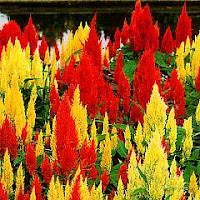 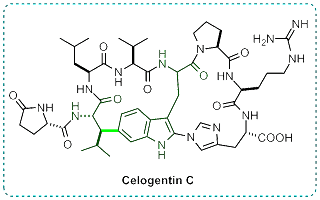 The parts of the synthesis I'm summarizing install the part of the molecule that is dark green, and the methylene indolylation occurs at the bright green bond.   By using an iodoindole and a palladium catalyst with a temporary palladium-coordinating group to direct the reaction to the specific C-H bond, the reaction proceeds in good yield and excellent regio- and stereoselectivity.  The chemistry is inspired by the strong precedent (same substrate, same conditions) by Corey in Org Lett in 2006 (doi: 10.1021/ol061389j) where the same bond was either arylated or acetylated.  In this paper, the difference is the iodoindole, which is prepared from tryptophan.  Tryptophan is protected, nitrated, the nitro group reduced, and a Sandmeyer reaction applied to convert to iodine.  The C-C bond is then formed via palladium-catalyzed coupling at the methylene beta to the carbonyl.  The phthalate protecting group is used though azide is needed there later on in the synthesis because the indolylation shut down in the presence of the azide. 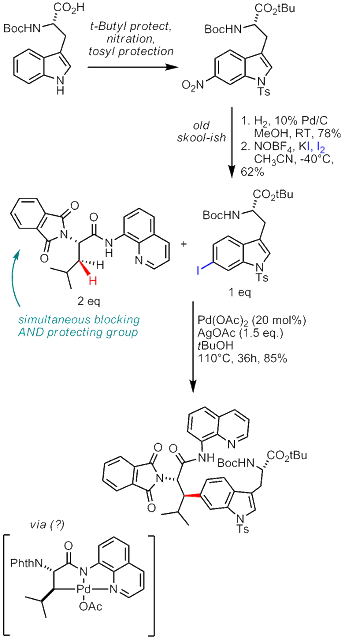 Presumably, the above intermediate forms according to the authors, and it is this species that performs oxidative addition with the C-I bond and reductive elimination to produce the coupling.  I don't like the idea of the C-H insertion happening immediately, but perhaps the slowness of this step is why 2 equivalents of this coupling partner is optimal.  Oxidative addition into the iodide, especially considering the presence of the silver salt, SHOULD theoretically be first, but if Corey proposed the reverse order, then, well.

Posted by Crystallinity at 8:23 PM 2 comments:

Check out this post by Everyday Scientist alerting the audience to a rare gem of an article title in Chemical Communications, "Clicking hard core sugar balls".  He took out the C.  Amazing.

Real post coming tonight, just need to Chemdraw a bit.  Weather's been too shitty for me to care about anything other than sleeping!
Posted by Crystallinity at 9:26 PM No comments: