This post has been hidden because certain readers couldn't handle my tone.

"Named reaction of the week" will start tomorrow - if you have any requests or feel a certain reaction warrants covering, do let me know! 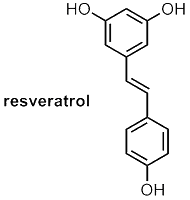 If you’re familiar with the current organic chemical literature, I’m sure you’re aware of the huge influx of research about resveratrol and polyphenol natural products and their antioxidant properties in the past few years.  Not only are polyphenols being studied for their potent antioxidant capability, but also their anti-cancer and anti- other things as well.

With that said, I’ll admit that I haven’t been super psyched about the chemistry to make the little guys, since all the molecules are so similar and a lot of the chemistry is radical-based, until I saw one recently in Org. Lett. (doi: 10.1021/ol902141z) that featured a Larock annulation to form the 5-membered ring of an indenone, the double bond of which was subsequently reduced to produce pauciflorol F.  Two total syntheses of this polyphenol have been reported (She, Pan, et. al. [Chin. J. Org. Chem. 2006, 26, 1300] and Snyder [doi: 10.1021/ja806183r]).  This paper differs in that the authors use a palladium-mediated cyclization approach to the indenone.

The chemistry developed by Richard Larock found its way into my heart as an undergraduate; I was already enamored with transition metals, but watching palladium bounce around in these reactions really just wow’ed me.  You can check out the group’s webpage for an idea of the substrate scope of this chemistry.  Kurti and Czako included the Larock Indole Synthesis in their named reaction text, the mechanism of which is detailed below: 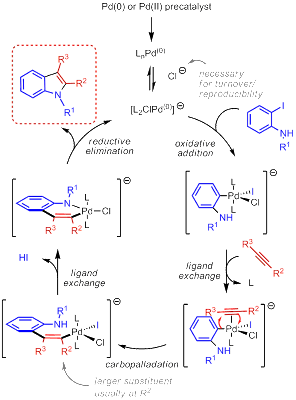 Alternatively, bromoarenes have been used as well as applied to other target motifs.  This paper uses o-bromobenzaldehyde substrates and cyclizes with a di-arylated alkyne with polymethylether substituents, which in the last step are globally deprotected to produce the polyphenol. 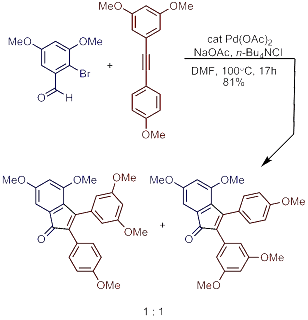 They naturally obtained both regioisomers as there is not much steric difference between the substituents, but both were useful because they could be used to form different natural products.  The rest of the first sequence attempted follows: 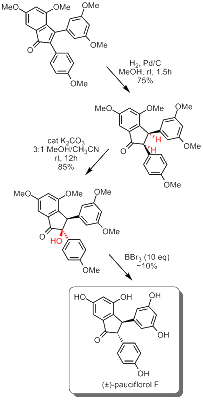 What made me squint my eyes at the details was the structural revision of a key intermediate, one step prior to the final pauciflorol F, compared to the previously reported structure - the last one just shown.   According to Snyder, the enolization attempted in hopes of epimerization of C2 of the compound shown with KHMDS and water quench provided the trans-product; however, the authors of this paper found that enolization with substoichiometric K2CO3 in 3:1 MeOH:MeCN in an effort to epimerize C2 resulted in the formation of the a-hydroxyindanone instead (but reducing the double bond in the presence of KOH induces epimerization in-situ so they can get around this inadvertent oxidation).  The 1H NMR data, shown below, displays two singlets, one broad, shifts of which agree well with the revised structure – compare these two the peaks as reported in the current paper and decide for yourself whether this was an accidental interpretation of the spectrum, seeing as how in the original paper, the mass coincides with the desired product and not the actual product…. who is correct?  (2a is the Pan paper, 2b is the Snyder paper, and 6 is the current paper - click on the image to see the full thing.) 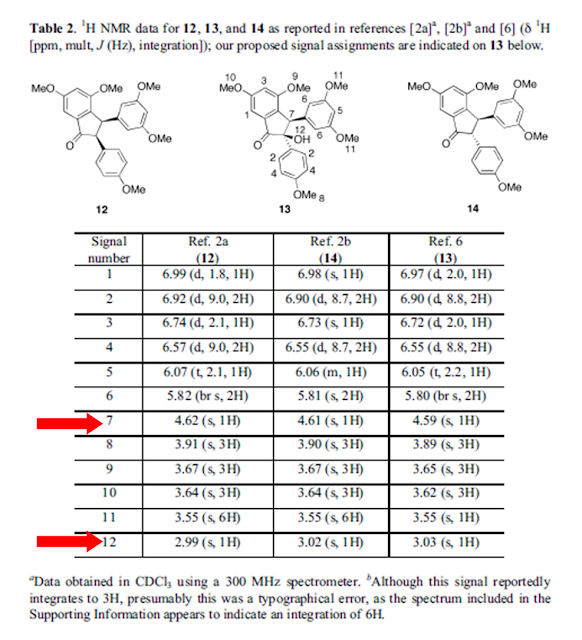 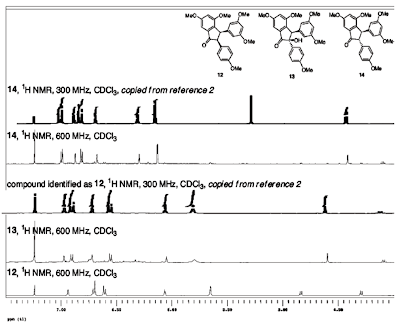 The top 2 spectra are published for the product that Snyder reported; the second is Snyder's spectrum for that compound, supposedly, while the 4th is the current author's spectrum for the reassigned structure.  The last is the starting material.

Personally, my organic 1 students would not accept that the two singlets describe the trans-product.  How can two papers report strikingly similar 1H NMR spectra, but completely different masses as the result of the same reaction?  Fishy.  Sure, the conditions were different.   Fortunately for Snyder, the global deprotection with BBr3 that followed resulted in a reductive removal of the inadvertently installed OH group and did, in fact, furnish pauciflorol F.  The current paper confirmed that this was indeed possible, and poked around the mechanism a little bit. Was the original structure misassigned purposefully because there was no way to explain it and the fact that the natural product was still formed made sense?  Or are the different reaction conditions enough to cause two different pathways/structures to form?  Oxidation happens in one case but not the other?  Was it just ignorance? Who knows… if there's something I'm missing, please let me know!

Posted by Crystallinity at 4:14 PM 12 comments:

Ok, ok, not actually lengthening the bond, but just in the graphic.

A real post coming tonight! It required a lot of consideration.  You'll see why.
Posted by Crystallinity at 8:02 PM 2 comments:

There are telephones inside C60!!

Another fun TOC graphic so soon?  Is it possible to devote a blog to this?  I may have to reconsider my work here.

This time, it's from an Acc. Chem. Res. ASAP, a dream come true... With the way this week is going lab-due-date-group-meeting-jump-off-roof-wise, I'm grateful!  I think the little guy should have a cigarette hanging out of his mouth, though.

The Spin Chemistry and Magnetic Resonance of H2@C60. From the Pauli Principle to Trapping a Long Lived Nuclear Excited Spin State inside a Buckyball  (doi: 10.1021/ar900223d)

If you could hold that red phone up to the world, what would you tell it?

Posted by Crystallinity at 12:38 AM No comments:

In August of this year, the drug asenapine (sold as Saphris by Shering-Plough) was approved by the FDA for treatment of schizophrenia and manic episodes of biopolar I disorder, according to a recent news article in Nature Reviews Drug Discovery (doi:10.1038/nrd3027).  Asenapine is an atypical antispychotic. The tricyclic 6-7-6 ring structure is common to most of the the atypical antispychotics (including clozapine and olanzapine, but not risperidone).  What makes them atypical is that they not only treat the "positive" symptoms of schizophrenia (hallucinations, delusions, mania) but the "negative" ones as well (depression, cognitive impairment).

A SciFinder search revealed 3 patents with published syntheses of the drug; surprisingly, no papers so far with SAR studies or anything of the sort, and just enough clinical trials to allow the drug to be marketed.  The drug wasted no time getting to the market - at least, according to the literature I looked through - which for a mental disorder like schizophrenia for which there is no truly good treatment, only adequate treatment, is wonderful.

Two patents had two different approaches (and the others were either duplicates or elaborations), and the most recent was an elaboration on one of the others.  The first, from 2006, sought to make the trans-pyrrolidine as efficiently as possible to improve upon the former synthesis.  The synthesis on a whole, though, is extremely steppy.  The second, in 2008 (Int. Pat. #: WO 2008/003460) instead chopped the molecule in two via a cyclization between a stilbene and an in-situ generated azomethine, followed by an Ullman condensation to connect the phenol with the other ring; use of the trans-stilbene naturally leads to the trans-ring juncture. 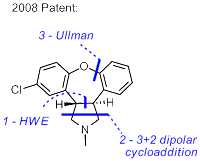 To make the stilbene, HWE: 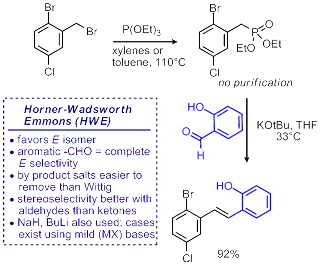 You can obviously see where there's room for synthesizing analogues here by using a different benzyl bromide in the first step.   The coupling partner used in the next step is activated in-situ by CsF or TFA.  I think it looks like a handy synthesis. 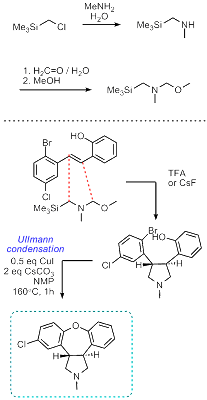 Posted by Crystallinity at 8:04 PM 12 comments:

If I find a TOC graphic that's funny, it's going here.

Come on... this is awesome:

From the same journal... don't you think they look like those pasta wheels we used to make art with in kindergarden with glue and tempera paint? 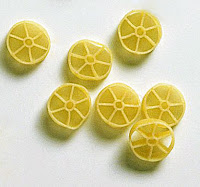 Posted by Crystallinity at 3:27 PM 4 comments: